Black Origin Threshold is a state that represents the purest form of the Black Heaven and Earth Technique.

This greatest of the Ki Circulation techniques was taught by Un-Wol to Han Chun-Woo who then passed it on to Shi-Woon Yi. It is envied and coveted by many masters and elites, most notably the former alliance chief.

The Black Origin Threshold causes the natural flow of the Ki to flow in reverse and signifies the moment when one surpasses the limits of the consciousness and the subconsciousness, the enemy & the self, and becomes the purest "Mu" (Fighting Spirit), but this is also its greatest weakness.[1] Despite being the ultimate Ki circulation technique, Black Origin Threshold is also considered to be Murim's worst demon art.[2]

Those who attain the threshold are all swallowed up by animal-like emotions, mainly rage, and lose their sense of self.[3]All known users have been unable to distinguish between friends and enemies, attacking anyone who approaches them. When Un-Wol showed this technique to the MAA Munjus he slaughtered all of them for no reason.[4]

Both Goomoonryong and Shi-Woon have exhibited strange discussions in their minds while in the Black Origin Threshold State. They seem to be aware of their actions but unable to properly comprehend the situations they are in. Chun-Woo speaks on his inability to control the technique[5] and Shi-Woon exhibits denial of a tragedy.[6]

This state also grants the user a seemingly limitless amount of strength and stamina. Using this state Chun-Woo fought and even killed several masters after being exhausted and shot twice. Shi-Woon, still recovering from his broken Ki-Center, managed to fight with two real master level fighters defeating one and fighting the other to a stand still.

Disregard for Pain and InjuryEdit

The Black Origin Threshold also allows the user to ignore all pain and injuries. Users have been shown to keep fighting when anyone else would have died several times over. Shi-Woon sustained a wound that tore open his side and maimed his left arm but still continued fighting.

Perhaps the strangest trait of the Black Origin Threshold is that while in this state the users' fighting style becomes animalistic. It loses all martial form and focuses solely on destruction and power. Despite some looking down on this lack of form, it has been shown to be very effective with Shi-Woon effortlessly defeating the Western White Star and Chun-Woo defeating several high level Murim-in including three of the Heavenly Way School's Five Protectors and Hyuk So-Chun.

While those who practice the style are seen with such aura, entering the Black Origin Threshold take this to the extreme. Chun-Woo caused almost everyone who saw him to tremble in fear when he entered it after the death of Shi-Ho and Shi-Woon caused the S.U.C who were surrounding him not to even try to attack him and freeze in their place after defeating those who attacked when he used it for the first time.

Interestingly, while rescuing Sera, Shi-Woon seemed to have entered into a pseudo-Black Origin Threshold. He exhibited the trademark limitless Ki and disregard for pain but retained his reasoning skills and focused on attacking the enemy and protecting his allies from harm. Although he never lost control there were several points when he showed the animalistic tendencies. After its use, Heo Won-Jae commented that his pulse was beating at an unreal pace and wondered how a human could live in such a state at all. Upon activation of the technique, however, Shi-Woon was shown to feel extreme pain and needed to crush his head on the wall so that he can remain conscious. Hence, it seems that this state is not the Black Origin Threshold but a manifestation of it and that this state was the result of the artificially activated Ki inside Shi-Woon by Bae Seung-Jae 's Spirit Medicine, the Ma-Hwan Dan.[7]

When Shi-Woon entered this state and engaged Ryuji at the Nine Dragons High School Ryuji commented that it was not the Black Origin Threshold that he knew. This was prompted by Shi-Woon seeming to observe and copy his fighting style. This is contrary to most everything else known about this state where the user is consumed with animilistic rage and at best seeks a singular individual to kill as opposed to anyone. It doesn't make sense that Shi-Woon would be doing such high level thinking as analyzing and copying a technique. This may be what was hinted at the first part of the series when Chun-Woo commented that he had failed to master the technique [8]. Shi-Woon's consciousnesses is later shown active in the state of the Outer Body Training Method and, given the explanation provided by Yae-Won master about the learning capabilities of the technique, it appears that the technique is the reason why Shi-Woon was able to interact as he did [9]. Also, while in this state the conscious was remembering events of the past and subconscious was not able to distinguish between the past and the present as shown after seeing the Chaotic Heavens Destruction Strike Shi-Woon believed that he is training with his master and even asked if it was his turn. 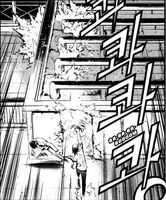 The crater resulting from a stomp using the Black Origin Threshold.

Chun-Woo displaying the animalistic tendancies of the Black Origin Threshold.
Add a photo to this gallery 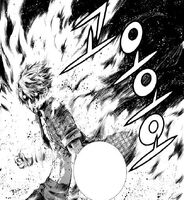 Shi-Woon destroying a car with the Black Origin Threshold. 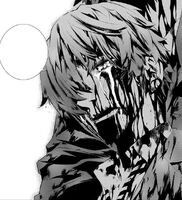 Shi-Woon being woken from the Black Origin Threshold by Jang-Il Jeong.

Shi-Woon continuing to fight after taking mortal wounds due to the Black Origin Threshold.
Add a photo to this gallery

Retrieved from "https://thebreaker.fandom.com/wiki/Black_Origin_Threshold?oldid=32411"
Community content is available under CC-BY-SA unless otherwise noted.